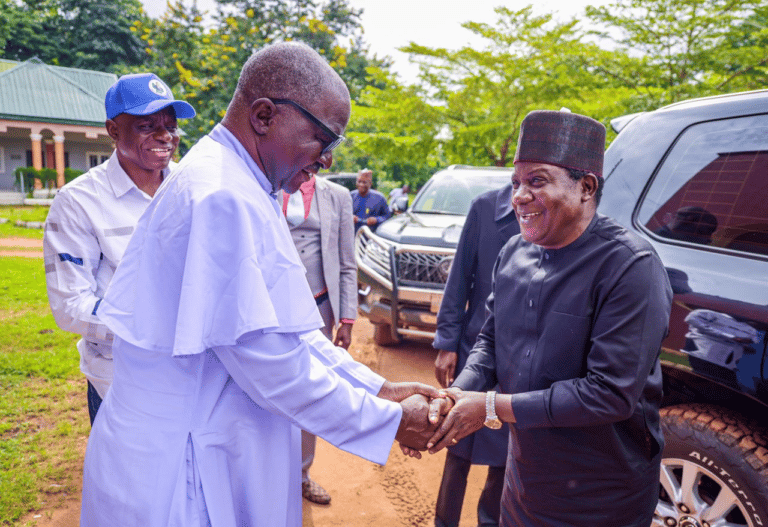 The Director General of the All Progressives Congress (APC), Simon Bako Lalong has visited the Catholic Diocese of Shendam to seek spiritual blessings ahead of the 2023 elections.

Naija News recalls that Lalong had come under serious backlash for making reference to the pope while sending a message to those who were against his appointment as the APC’s DG. The governor later sent an apology to the Catholics over his statement, stressing that he was misquoted and his statement was misconstrued. Seeking the approval of the church, Lalong who was at the Bishop’s Court Shendam together with Deputy Speaker House of Representatives, Idris Wase, was received on behalf of the Bishop by Rev. Fr. Raymond Gofut, Vicar General, Catholic Diocese of Shendam. Lalong, during his speech, thanked the church for their constant prayers and said he was there to appreciate the Diocese for their support and encouragement, especially after his appointment as APC’s DG. He hoped that the Diocese would lend its support during the upcoming election. Speaking further, Lalong praised the church for its guidance and counsel which he said had brought about peace in the nation. While welcoming the governor to the Diocese on behalf of the Bishop, Gofut appreciated Lalong for his effort in carrying the people along and seeking the blessings of the church. He led other Priests to pray for Governor Lalong over his recent appointment as the Director General of the APC Presidential Campaign Council, asking God to grant him wisdom, favour and protection as he carries out the national assignment. Wike Fooled Us, Imposed Governorship Candidate On Us – Aspirant