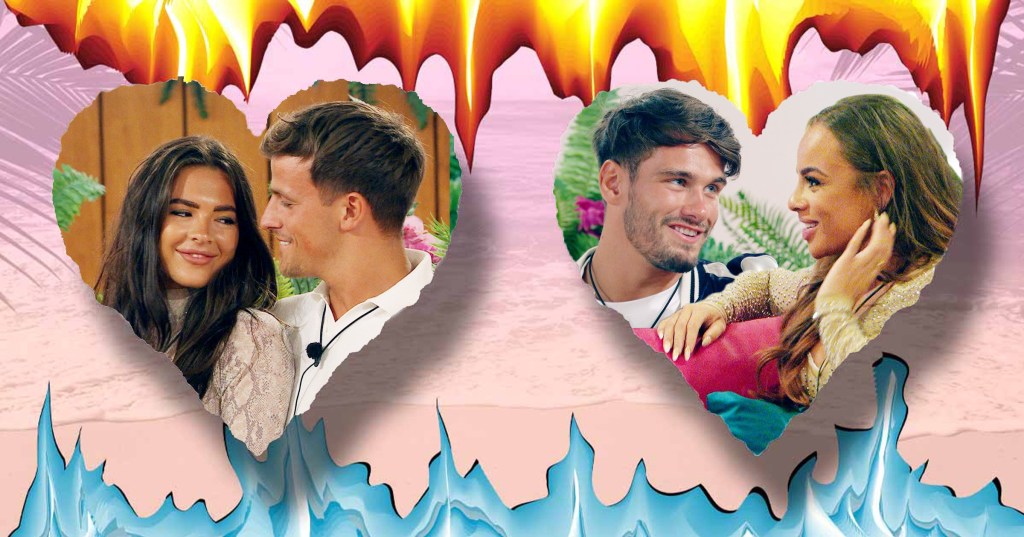 Love island is getting even hotter as we come to the end of week 3, and Metro.co.uk is back once again to give you the ultimate guide to how compatible the current couples are.

Well, well, well. What a week it’s been in the Love Island villa.

From shock exits to brand-new bombshells, the third week on the isle of Majorca has certainly put all the islanders through their paces.

A week of drama culminated in Friday’s recoupling, and after seven days of tension, mugging off and sneaking around, we’ve got quite a few rejigged couples to show for it.

In the biggest surprise of the night, bombshell Antigoni Buxton was picked by Davide Sanclimenti, despite having flirted with Danica Taylor in recent days. He even gave her ‘the gift’ of a kiss, and we’re still not over it.

Elsewhere, Jay Younger caused a stir when he took his chance and picked to couple up with Paige Thorne, despite her fairly solid pairing with Jacques O’Neill.

Ekin-Su Cülcüloğlu ended up with newcomer Charlie Radnedge, after he’d spent the last few days trying to win over the attention of Tasha Ghouri – with mixed successes, and a lot of tears.

After the latest quite frankly, wild, recoupling, Louella Alderson, a relationship expert and co-founder of dating site SoSyncd, has once again provided her thoughts on exactly who are the most and least compatible pairings of the moment, exclusively for Metro.co.uk.

This week, Louella has placed Gemma Owen and Luca Bish, at the top of the list, while Jacques O’Neill and Danica Taylor (who we’re not even sure have had a proper conversation yet) trail at the bottom, after some very unpredictable moves were made this week.

Only the Love Island villa’s most underwhelming couple Gemma & Luca have stood the test of time (a week) and come out on top this week. Neither of them has been remotely interested in any new islander, which the other couples can’t say. Even when Danica decided to couple up with Luca, he was incredibly dismissive of her, and Luca has shown on multiple occasions he only has eyes for Gemma. At the moment, it feels like it would take a real bombshell to turn either of their heads.

But what does Gemma really think? She isn’t really giving Luca very much. Maybe we aren’t seeing it…or maybe she just doesn’t really like him that much. With being coupled up from the get-go, there feels like an element of being the ‘original’ couple, which can be a good thing. But there’s also the issue of being ‘married off’ too quickly, as Gemma put it.

Luca has a great sense of humour and is often the life of the party. He always has something to say when something ‘goes off’ in the villa and it’s clear he’s confident in his and Gemma’s relationship. He is outgoing and enjoys being around people. Gemma is clearly very independent and likes to have a lot of control over her life. She is also very logical and efficient. Gemma can be very competitive, as she has told us on many occasions. However, with this dynamic, there’s a danger that in the future Gemma will find Luca too easy-going and he won’t push her or challenge her enough. As long as they are both willing to work on their relationship, they can overcome these differences.

The most important question between this couple now is when will Gemma tell Luca her dad is Michael Owen!?

Dami’s interest in Indiyah was a bit of a shock to us viewers having not seen much interaction between the couple in the villa in the first two weeks. However, to the islanders, their compatibility was obvious. This connection came before both of their partners got the boot and, for other people to have picked up on it, the spark must have been evident.

Dami and Indiyah appear to be more intuitive than their other islanders and they connect on a deeper level. This could be a solid pairing as they both value more abstract conversations and enjoy talking about all kinds of future possibilities. Dami and Indiyah could end up talking for hours about various concepts and they love to use their imagination. They are both creative in their own ways and they appreciate the way one another thinks, which helped them form a strong connection whilst coupled up with other people.

A sense of humour is key in any relationship. It helps to keep things light and fun. Plus, it can help you get through rough patches. Indiyah has a very upbeat, positive sense of humour, while Dami has a more dry, sarcastic wit. There could be a lot of fun banter and playful teasing between these two as they explore each other’s sense of humour.

It has been good to watch both Dami and Indiyah come out of their shell and open up about how they are feeling. They are going after what they want and we see strong potential in this couple.

I mean, there really hasn’t been a new islander that hasn’t caught Tasha’s attention.

She told Charlie she and Andrew have a great relationship and she was opening up to him in ways she hasn’t before. And in the same breath, she told him she wanted to get to know him too. It seems Tasha feels every new islander has a quality that Andrew doesn’t have.

The problem with Tasha and Andrew is Tasha feels like she’s mellowed and lost herself a bit. She said when she’s with someone she goes a bit gooey, which we’re all guilty of. But for Tasha and Andrew, the issue still stands that they are very similar people.

They share common values and interests, and both partners are typically very committed when they are in a relationship. Andrew is supportive and loyal, and Tasha is outgoing and friendly. They clearly enjoy spending time together, and they have the potential to have a strong and lasting relationship.

However, Andrew is putting a lot more effort into their relationship and it looks like Tasha doesn’t fully appreciate this as she is looking for something more than what they have. Their personalities are compatible, but there still isn’t that sexual chemistry between them. We’re interested to see how this plays out. But from what we’ve seen, an event like Casa Amor could completely turn this couple on its head.

As Luca put it, there is something missing between them, and it doesn’t take Poirot to work it out!

Ekin-Su has had a rollercoaster of a ride in her time in the villa. She might not be everyone’s cup of tea, but she has kept us all entertained which is the ultimate goal (after finding love of course)!

Charlie picking Ekin-Su over Tasha was a shock to everyone but it feels like the right decision compatibility-wise. Charlie and Ekin-Su show promise as a couple. For starters, as soon as he entered the villa, he told the group he loves fiery women. So it’s looking positive for Ekin-Su from that perspective.

Most importantly, Ekin-Su and Charlie make each other laugh. Laughing together in a relationship is one of the most bonding experiences you can share. It brings you closer and helps you feel more connected. The fact that Ekin-Su and Charlie connected on this level from the get-go is promising.

Charlie said relationship-wise, once he’s in, he’s in, which is what every partner wants to hear, especially when they’ve previously been ‘mugged off’. We just hope Charlie puts his money where his mouth is!

Jay felt like he and Ekin-Su are not ‘personality compatible’. It was looking promising at the beginning of the week but Jay’s genuineness is being called into question here. From what we’ve seen, Jay is a strategic person, which no doubt helps with his career in investment banking, but not for his relationship with Ekin-Su. He chose the ‘safe bet’ with Ekin-Su and then realised that the other female islanders weren’t buying her act and 180’d pretty quickly.

Choosing Paige in the recoupling was a bold move as he had to steal her from Jacques. But Paige has said she’s open to getting to know Jay respectfully and is keeping an open mind.

Paige is caring and generous, and she enjoys being helpful to others. She often put the needs of others before her own and may have difficulty saying no, which could be why she has said she will get to know Jay. Paige is emotionally intelligent which is partly why Jay is attracted to her. She’s also incredibly loyal and it’s been clear this week that she does really like Jacques so we can’t see Paige opening up to Jay too much.

Davide has had a slow start to his Love Island experience, as has Antigoni. There are some similarities between these two which prove promising and provide a solid level of compatibility. They both highly value integrity, loyalty, and practicality. Plus, they enjoy spending time together. This creates a strong foundation for the relationship that can withstand obstacles. But it isn’t everything.

Quite often you can tell if there’s a spark between people by the way they talk to each other. If you’re both engaging in witty banter and making each other laugh, it’s a good sign that you’re interested in each other. When you’re attracted to someone, your body language changes too. You might find yourself standing a little bit closer to them than usual, or you might accidentally touch them more often. We haven’t seen any of this with Antigoni and Davide. It’s early days for Antigoni and things can develop over time, as we’ve seen with Dami and Indiyah, but the sparks aren’t flying between this couple yet. It feels like Davide is still waiting for his ‘amore’ to come in and sweep him off his feet.

Jacques’ reaction to Jay wanting to get to know Paige showed one of two things. Was it maturity and openness to the Love Island process, or was it that he doesn’t like Paige that much and his head could be turned by new islanders in the villa Time will tell on this one.

Jacques chose Danica by default and they clearly don’t have a connection between them in a romantic sense. Danica hasn’t connected with anyone in the villa in a romantic way yet and it will take a new bombshell to spark her interest.

Jacques made a good point about friendship in relationships. He told Paige he came into the villa wanting to meet a best friend and he has. A strong friendship is the foundation of a healthy relationship. If you’re friends with your partner, you’ll feel a greater sense of trust and be able to rely on each other for support. Of course, friendship isn’t the only important ingredient in a relationship. But if you’re looking for a lasting, fulfilling partnership, it’s a good place to start.

MORE : The Big Questions: Davina McCall on Big Brother’s return, being in awe of Dame Deborah James and her daughters going on Love Island 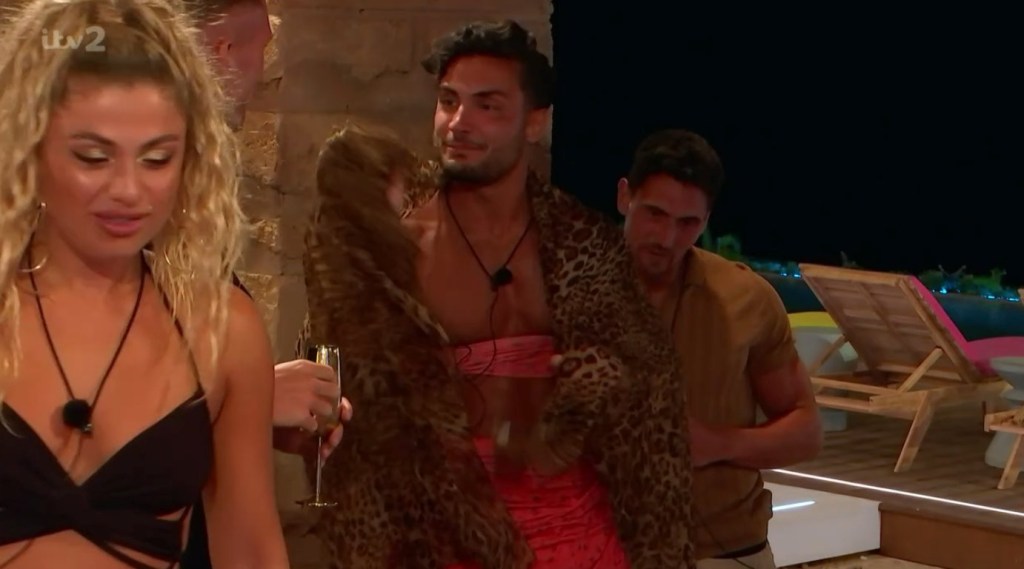 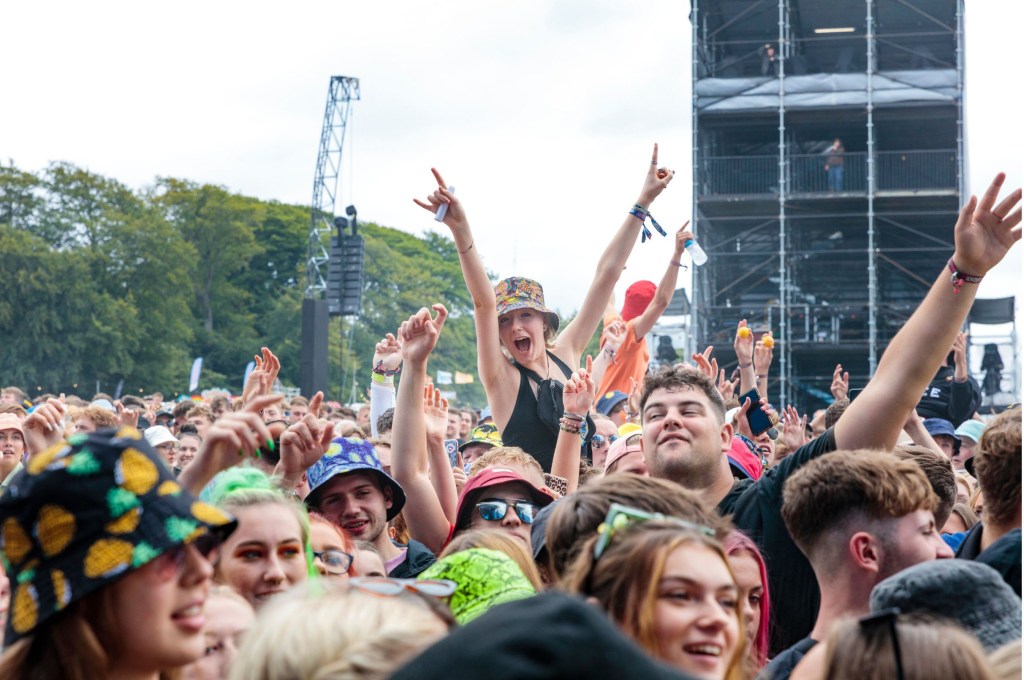 Reading and Leeds 2022: Price, line-up, and how to buy tickets 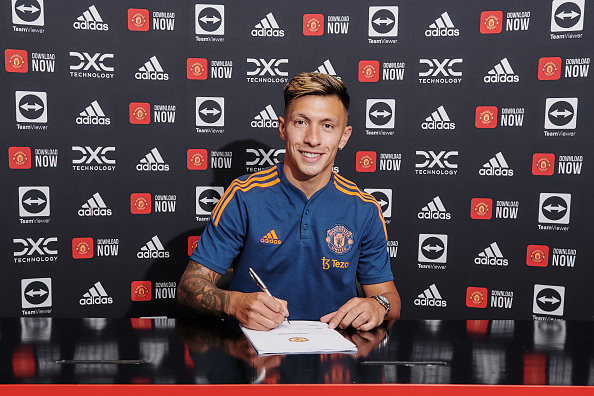 Lisandro Martinez takes no.6 shirt at Manchester United after £47m move from Ajax