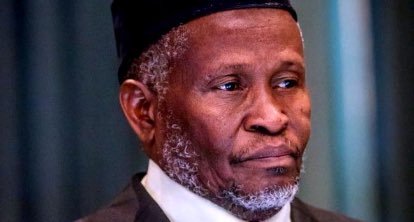 The President of the Senate, Ahmed Lawan, on Tuesday, directed the probe of former Chief Justice Tanko Muhammed over allegations of corruption raised against him by some justices of the Supreme Court.

Fourteen justices of the Supreme Court had recently leveled corruption allegations against the former CJN, which he denied. However, after his resignation, which was made based on undisclosed health challenges, Lawan gave an order for the probe of Tanko. Lawan said: “The chamber mandates the Senate Committee on Judiciary, Human Rights and Legal Matters to go ahead with its assignment in the quest to find a lasting solution to the matter by interacting with relevant stakeholders to address the complaints raised in the petition by the Justices of the Supreme Court. “The Senate Mandate the Senate Committee on Judiciary, Human Rights and Legal Matters to interface with the relevant stakeholders in the three Arms of Government as well as at the Bar and on the Bench to collate aggregate views and positions on the short term, medium-term and long term measures needed to decisively address the crisis facing the Judiciary, including the immediate fiscal intervention as well as long term and sustainable budgetary allocations, required for the optimal performance of the Judiciary, in line with global best practices; and urge the Senate to wish the Hon. Chief Justice well, following many years of meritorious service to the nation and to pray for his good health.” The Committee Chairman, Senator Bamidele, said his team was taking the necessary steps in investigating the allegations against Tanko as directed by the President of the Senate. Bamidele said, “The poor welfare of Judicial Officers would affect the delivery of the judiciary in respect of their output and will prevent them from performing optimally. “The sacred image of the Judiciary, which is the epicenter of the temple of justice, should be preserved by the Senate through appropriate legislative measures in order to safeguard this highly revered institution and prevent it from being ridiculed. “Though Hon. Justice Ibrahim Tanko Muhammed has stepped down as CJN. Most of the issues raised by the Justices of the Supreme Court and other stakeholders within the Judiciary still remain and need to be addressed urgently to prevent an eventual shutdown of the Judiciary.”

Christian lives are in danger – Clerics, worshipers decry target of churches by gunmen